Roller derby is a contact sport played by two teams of five members roller skating in the same direction (counter-clockwise) around a track. Game play consists of a series of short match ups (jams) in which both teams designate a jammer who scores points by lapping members of the opposing team. The teams attempt to hinder the opposing jammer while assisting their own jammer—in effect, playing both offense and defense simultaneously. Roller derby is played by approximately 1,250 amateur leagues worldwide, nearly half of them outside the United States. 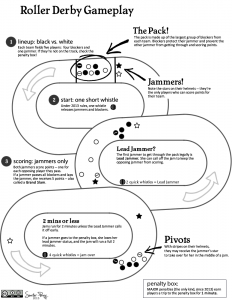 While the sport has its origins in the banked-track roller skating marathons of the 1930s, Leo Seltzer and Damon Runyon are credited with the basic evolution of the sport to its initial competitive form. Professional roller derby quickly became popular; in 1940, more than five million spectators watched in about 50 American cities. In the ensuing decades, however, it predominantly became a form of sports entertainment where the theatrical elements overshadowed the athleticism. This gratuitous showmanship largely ended with the sport’s contemporary grassroots revival in the first decade of the 21st century. Although some sports entertainment qualities such as player pseudonyms and colorful uniforms were retained, scripted bouts with predetermined winners were abandoned.

Modern roller derby is an international sport dominated by all-female amateur teams, in addition to a growing number of male, unisex, and junior roller derby teams, and was (as a roller sport) under consideration for the 2020 Summer Olympics. Most modern leagues (their back-office volunteers included) share a strong “do it yourself” ethic which combines athleticism and elements from camp. As of 2016, the Women’s Flat Track Derby Association (WFTDA), had 397 full member leagues and 48 Apprentice Leagues.